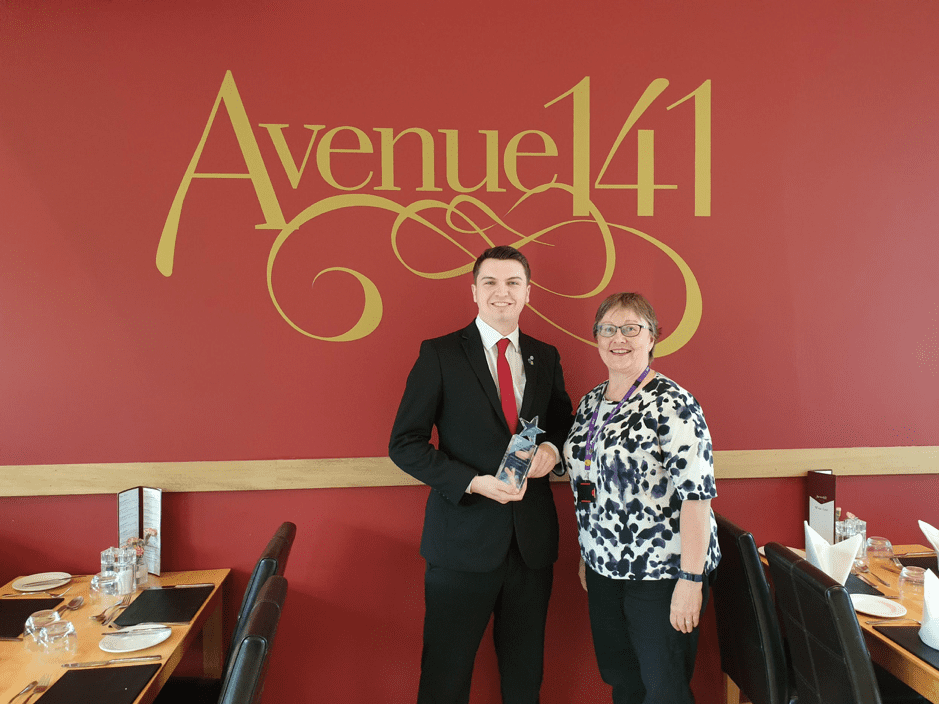 A talented Fareham College hospitality and catering student has been named the Institute of Hospitality Southern Front of House Student of the Year by successfully showing what it takes to be a master mixologist.

Lucas Kelly was shortlisted for the Highly Commended Chef Award for the same competition last year. He was unsuccessful, but the experience encouraged him to enter again this year with hopes to win an award in a different category.

Lucas had to submit a written application that demonstrated his commitment and passion to the industry. For the semi-final, he was asked to complete a short promotional video showcasing either his cocktail or wine serving skills. Lucas chose to make his favourite cocktail, an Espresso Martini, and was announced the winner at a lavish awards evening at the AA 4-star Balmer Lawn Hotel in Brockenhurst on 16 May.

Brought up in a family bed and breakfast, where he still works today, it was watching cooking programmes at a young age with his mum that convinced him to pursue a career in the industry. When Lucas got his GCSE results and received an A in catering, he continued his studies at Fareham College and it was there that it really became a passion.

“When I got to college I saw what the true side of hospitality was like”, said Lucas. “In school, you have one classroom with one standard home oven shared between four students at a time; at Fareham College we have a fully functioning restaurant. We also have extremely professional lecturers who know the industry inside and out and have invaluable knowledge and links within the industry.”

Lucas completed his Level 1 and 2 training at Fareham College and came away with Distinctions in both. He is hopeful he will make it a triple when he receives his Level 3 results later this year. Talking about the training he’s received at the College, Lucas said:

“For the first two years we’re taught front of house and back of house training. For the third year we decide which side we want to specialise in and I chose Level 3 Front of House. We learn everything from knife skills and how to use the industry-standard equipment at the College, right through to understanding French terminology and different menus. We also learn about Barista, cocktails and wines.”

Asked whether he feels the award will help to open any doors for him, Lucas believes it already has:

“I’m going to work for South Lodge Hotel, which is part of the Exclusive Hotels chain. I’d like to think I had the job before I received the award, but my letter didn’t arrive until after I’d won. I have three weeks left at college and start my new role next month. I’m extremely excited but will be leaving my home, which I’m a big part of because it’s a bed and breakfast and I am relied upon a lot there.”

Pippa Booker, who is Lucas’s tutor and joined him at the awards, added:

“I am so proud of Lucas. He practiced until he was perfect, which gave him confidence and he was determined to win. His natural charisma came through and he certainly has a brilliant career in front of him.”