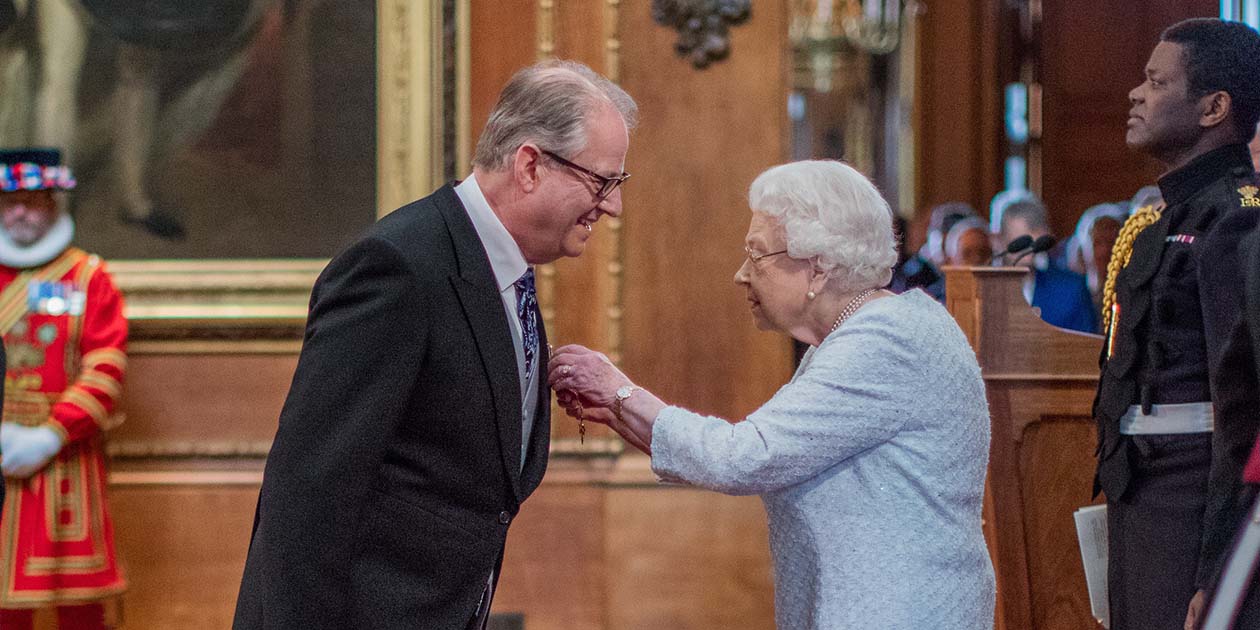 Nigel Duncan, Fareham College Principal being awarded his OBE by Her Majesty the Queen.

On Friday 22 March, the Principal of Fareham College, Nigel Duncan was presented with his OBE by Her Majesty the Queen at Windsor Castle for his services to Further Education, during a career spanning nearly 40 years.

After a number of years as a part-time lecturer in Birmingham, Nigel started his full-time career in Further Education as a lecturer at Solihull College of Technology in 1981. Following this he moved on to hold senior posts at Lowestoft College, as Director of Faculty for Vocational and Technical Studies, and West Herts College as Director of Curriculum.

Nigel joined Fareham College in 2005 as Vice Principal Curriculum and Corporate Development, before being appointed Principal and Chief Executive of the College in March 2012.

Over the next few years, Nigel led Fareham College to win the prestigious TES Best FE College Award in 2018. The steps to this prime position included Fareham College opening a Centre of Excellence in Engineering, Manufacturing and Advanced Skills Training (CEMAST), a leading centre in the UK for apprenticeships and technical qualifications and being judged ‘outstanding’ at its most recent Ofsted inspection in 2017.

This Autumn, the College is to open a £4.1m Civil Engineering Training Centre (CETC) created to deliver more than 1,600 civil engineering and groundworks apprenticeships during the next five years.

“Today has been a day I will never forget. This award is a huge honour and one I simply would not have received were it not for the amazing support of my family, friends, and the fantastic colleagues I have had the opportunity and privilege to know and work with over the years.”